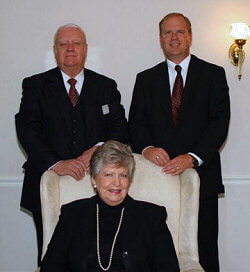 Another goal of the Northcutts in 1976 was to provide a home-like atmosphere in a building designed specifically for a funeral home. As one of the first funeral homes in eastern Kentucky arranged exclusively for a funeral home, its one-floor design with easy access throughout the building, spacious visitation rooms, and a church-like chapel with pews is still greatly appreciated. Renovations have sustained both the functionality and appearance.

Denny recalls, "From the time I served my apprenticeship until I built our facility, nearly all funeral homes in this area operated out of a private home that had been converted into a funeral home. My goal was to provide excellent service in a building with a home-like atmosphere designed specifically for a funeral home. Through the years, the building has been renovated and antiques acquired to reflect the culture and diversity of people in the region. In fact, some of our most cherished possessions are treasures of families presented as gifts. An iron dog paperweight, a Purple Heart, and an antique memorial folder of an infant are some of the items displayed in an oak cabinet that survived the 1920s flood."

The Northcutt family has always participated in community service organizations and been active in professional associations. Besides being active in local agencies, Denny served two terms on the State Board of Embalmers and Funeral Directors, (a regulatory and licensing agency) and is past president of the Eastern Kentucky Funeral Directors Association.

John, in addition to working at the funeral home, was reelected to his sixth term as Rowan County Coroner. He also serves as Morehead Volunteer Fire Department Assistant Chief and is president of the KY Coroners Association and former president of the Morehead Optimist Club. A member of the KY Mass Fatality Team, he assisted in several retrieval efforts including Hurricane Katrina, Comair Flight 5191 in Lexington, and a private plane crash near the Breathitt and Perry County line. John is married to Tina, a Rowan County Middle School Librarian and church youth leader. They are the parents of three daughters: Victoria, Alexandria, and Natalie.

Helen retired from Morehead State University following 31 years of service and as a licensed funeral director is actively involved in the funeral home. A member of several charitable originations, she is past president of the Morehead Woman's Club, the Rotary Club of Morehead, and the Rowan County Public Library Board of Trustees.

Northcutt & Son's excellent professional reputation is based on providing caring, individualized, and affordable service with dignity and integrity before, during, and after the funeral service. People tell us they feel confident knowing that nearly always one of the Northcutts will answer the telephone or doorbell. People also appreciate knowing that, without exception, every family served has personal contact with the Northcutt family.

In a period of time spanning seven decades and over 100 years of combined experience, the Northcutt family continues to dedicate their lives to serving families throughout the region. "Serving Others as We Would Like to Be Served" continues to be the goal.

Pre-Planning
Pre-Arrangements Form
Have The Talk of a Lifetime